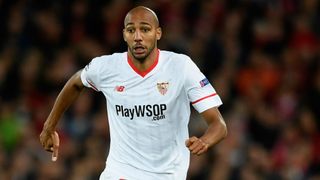 World Cup winner Steven N'Zonzi will not be leaving Sevilla for less than the €40million stated in his buyout clause, according to the club's director of football Joaquin Caparros.

N'Zonzi, who played the last 35 minutes of France's 4-2 victory over Croatia in the World Cup final on Sunday, has been linked with a transfer to Arsenal or Barcelona but Caparros claimed no offers were on the table for the 29-year-old.

The former Blackburn Rovers and Stoke City midfielder joined Sevilla in 2015 and has made 90 LaLiga appearances in three seasons at Estadio Ramon Sanchez Pizjuan and Caparros said he hoped N'Zonzi would remain at the club for at least two more years.

Caparros told Cadena Ser that clubs with an interest in N'Zonzi would be told to meet the player's buyout clause, in the same way Sevilla insisted Barcelona met their €35.9 million valuation of Clement Lenglet, who moved to Camp Nou last week.

"Steven has two years remaining on his contract," said Caparros. "We have texted each other during the World Cup and I have congratulated him on his achievements with France, of course.

"We have not received any offers for him and I will say the same to any clubs who may be interested as what we said with Lenglet – he has a buyout clause, and it's €40m."

Caparros played down suggestions that Sevilla were in the market to sign Barcelona full-back Aleix Vidal, saying that he already had enough cover on the right side of defence.

Along with Carlos Bacca and Vicente Iborra, Vidal is one of a handful of former Sevilla players who have been linked with a return to Pablo Machin's side.

On Vidal, Caparros said: "He has been linked to us but we already have players in his position.

"It is the same with Bacca and Iborra.

"These are players at other clubs who all left their mark at Sevilla but are earning more elsewhere and now we have our own players."