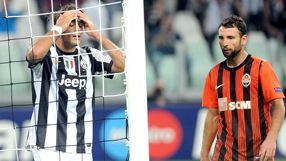 Shakhtar, inspired by a lively quartet of Brazilians, scored first, dominated Juventus for most of the match and almost snatched victory when Willian hit the crossbar in stoppage time.

The 40,000 capacity state-of-the-art arena, which was opened last year and is invariably full for Serie A games, was blighted by rows of empty seats as a bus strike and inflated ticket prices appears to deter fans from the Group E encounter.

"We have many supporters who live outside the city and it is Tuesday, so that creates problems," Juventus director Giuseppe Marotta told Sky Sports Italia.

"Perhaps we deserved a different atmosphere, but we know there are many watching at home."

They were not helped by the 24-hour bus and tram strike which left many parts of the city gridlocked.

Juventus have been greatly looking forward to their return to the Champions League after a two-year absence, so much so that the crowd even applauded the anthem which blares out before all games in the competition.

Unbeaten in their last 45 Serie A games, their dominance of Italian football since opening the stadium has given them belief that they can mount a challenge for the title this season.

But Ukrainian double winners Shakhtar, who came into the game on the back of an incredible run of 25 wins in all competitions, had other ideas.

"We played very well, we put them in difficulties and the result could have been in our favour," said Shakhtar's Romanian coach Mircea Lucescu, who has led them to six league titles since taking charge in 2004.

There was an early warning when a well-worked move ended with Razvan Rat crossing to the far post where Henrik Mkhitaryan somehow missed the ball from three metres.

Shakhtar then dominated the next 20 minutes, their moves superbly orchestrated by Willian whose easy passing style and mop of hair give him a resemblance to former Colombian midfielder Carlos Valderrama.

The former Corinthians player, who joined Shakhtar five years ago as a 19-year-old, cleverly set up the opening goal for the Pitmen.

After his initial shot was blocked, the ball rebounded to him on the edge of the area and he rolled the ball to the right for Alex Teixeira to fire into the roof of the net.

Juventus replied out of the blue two minutes later when a corner was pulled back to Bonucci who fired an unstoppable shot into the top right hand corner.

But, despite some neat play between Andrea Pirlo and Claudio Marchisio in midfield, the Italians looked unusually disjointed with too many attacks ending at the feet of toothless forwards Alessandro Matri and Mirko Vucinic.

Juventus were more aggressive in the first 20 minutes of the second half, creating several good openings, but Shakhtar regained control for the closing minutes.