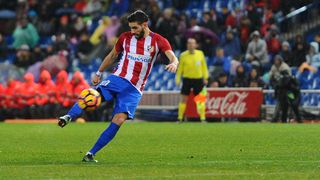 Diego Simeone saluted the performance of Yannick Carrasco after the Belgian was instrumental in Atletico Madrid's dramatic 3-2 defeat of Celta Vigo on Sunday.

The two sides produced a thrilling spectacle at the Vicente Calderon and Atletico came from behind twice – Fernando Torres cancelling out Gustavo Cabral's opener with a spectacular goal assisted by Carrasco.

John Guidetti appeared to have stolen a win for the visitors late on, before Carrasco smashed a brilliant 25-yard volley in and then Antoine Griezmann wrapped things up at the end to rescue victory from the jaws of defeat.

Carrasco was the one to draw Simeone's praise, though, while Kevin Gameiro – who struck the crossbar in stoppage time – was backed by the Argentinian as he continues to struggle in front of goal.

9 - Atletico have scored more goals from outside the box than any other side in La Liga this season. Missile. February 12, 2017

"He's working hard," Simeone said of the Belgian. "He strives to improve.

"He started the season extremely well, surpassing his numbers [of last season]. In Barcelona he did well, and today too.

"Of the three goals, his is possibly the most spectacular. It is always important for the strikers to score. "As for Gameiro; the knock down for Griezmann's goal was key, and he hit the crossbar.

"He has to be calm. We love him and he will give us many joys."

The Calderon crowd was nowhere near full capacity for the visit of Celta, though Simeone was understanding and even praised those who were there for pushing Atletico over the line at the end.

"It was a difficult day; very cold, at night, Sunday, tomorrow people are at work again," he said.

"But the fans were key in the final stages. At other times the fans might have been irritated, but on the contrary.

"The last ten minutes was the best part of the game for the team and we scored two goals in ten minutes."