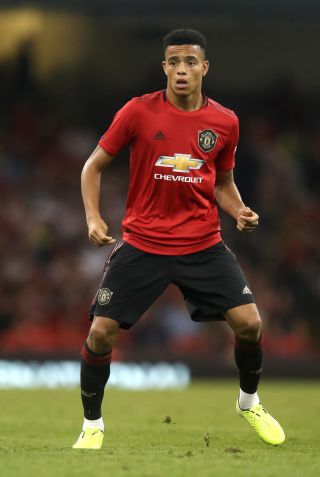 Ole Gunnar Solskjaer will unleash Mason Greenwood in Manchester United’s Europa League opener against Astana, with the 1999 treble hero saying the 17-year-old is already one of the best finishers he has ever seen.

After two years back at European football’s top table, the Old Trafford giants are preparing to kick off a gruelling Europa League campaign at home to the perennial Kazakh champions.

United lifted the trophy when they last played in the competition in 2016-17, when manager Jose Mourinho’s side bulldozed their way through to the final with an experienced squad.

But Solskjaer will change tack by trusting youth, with Greenwood’s starting role the most eye-catching news heading into the Group L encounter.

“He is still very young, Mason, but he’s maturing,” Manchester United manager Solskjaer said. “He’s developed so much in the last six months since I came in.

“I remember the kid who just wanted to play with mates in the under-18s. And now he’s knocking on a door, he’s ready to play these games.

“For me, he has been in the under-21s with England, he’s tasting it more and more. And his appetite for football must be growing.

“I just don’t want to put too much pressure on him, apart from, ‘go out there and enjoy yourself’.

“Work hard, close down, because when the ball lands in your feet I know you’re going to score anyway. I know you’ll make the right finish. Keeper might make a fantastic save but he’s one of the best finishers I’ve seen.

“It’s just that enjoyment, express yourself, go out at Old Trafford because there’ll be 11 Astana players living the dream tomorrow.

“It must be one of the biggest games of their careers for some of these players, but I want it to be a memorable one for our players as well and Mason is one of them.”

Solskjaer has confirmed fellow academy graduate Axel Tuanzebe, 21, will be in the line-up against Astana, 28 months since last starting a match for United at Old Trafford.

A knock sees Daniel James join Paul Pogba, Anthony Martial and Luke Shaw on the sidelines, while Fred comes into midfield and back-up goalkeeper Sergio Romero gets the nod ahead of David De Gea.

The Spain goalkeeper extended his contract at Old Trafford until at least 2023 at the start of the week and United have acted quickly to tie Victor Lindelof down to a new and improved deal.

It’s an honour to play for this club and I can’t wait to do so for many years to come. My future is only red. #MUFCpic.twitter.com/LZc63Ynib2— Victor Lindelöf (@vlindelof) September 18, 2019

Lindelof was linked with Barcelona over the summer but has ended any such talk by committing his future to the Old Trafford club, signing a deal until 2024 with the option of a further year.

“I love playing football and my aim now is to help the team to win trophies and repay the fans for their unrivalled support,” the defender said.

“I know that everyone at the club shares this vision and will give everything to get Manchester United back to where it belongs.”