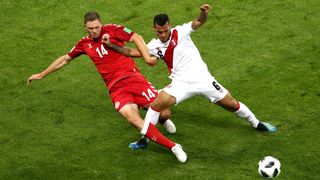 Former Denmark goalkeeper Thomas Sorensen feels the side need to "muscle up" as they steel themselves for the physical threat posed by Australia.

Age Hareide's men were perhaps fortunate to defeat Peru in their World Cup Group C opener, Yussuf Poulsen netting the only goal after Christian Cueva had missed a penalty for their opponents.

A win over the Socceroos in Samara on Thursday, combined with Peru failing to beat France, would see Denmark into the last 16 - a feat they have not managed since 2002, when Sorensen was in goal for a 3-0 defeat to England in Japan.

And the former Sunderland, Aston Villa and Stoke City keeper, who won 101 caps for his country, has warned Hareide's side to be ready for a combative contest.

"Today will be a good indication [of how far Denmark can go], if they can play more free," he told Omnisport.

"Like how they showed in qualifying and against Ireland in the play-offs and against Poland when they beat them 4-0 in Copenhagen.

"If they do that I can see them being a test for any team, but they need to play better and play faster and muscle up a bit.

"They talked before the Peru game about their physical strength compared to them but I thought Peru came out looking strongest, so that needs to change because Australia are not going to be easy, that's one of their strong sides is being physical and the fight they always come up with."

Former keeper Thomas Sorensen is in town for the clash vs Managed to grab him, once he’d had his breakfast, to chat all things 21 June 2018

Sorensen believes Denmark need to get star man Christian Eriksen more heavily involved, while hoping that the opening win will have eased the burden on the players' shoulders.

"I'm hoping we can get him more into the game because it will be difficult the way Australia set up, they're very well drilled by Bert van Marwijk and they've been working on limiting that space from the defence," he added.

"They work across the pitch and stay in the same shape, so it'll be hard for Eriksen to find that space but it'll be vital for Denmark to get him involved and get him on the ball as much as they can, that'll be key.

"Hopefully they go into today with a lot more confidence and feel like the pressure is off.

"They're probably aware Australia are not as much of a threat on the counter as Peru were, not as quick and sharp, and hopefully they can get their game going a little bit better.

"Everyone was happy we won the first game but we have to also be realistic that, if we want to go far in this tournament, that wasn't good enough and the players have come out and said that we discussed it after the game and that needs to change."