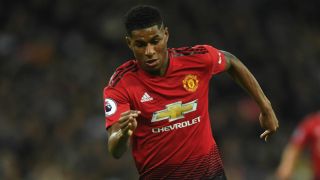 Manchester United star Marcus Rashford is a "tremendous talent" who will continue to improve, according to England manager Gareth Southgate.

The 21-year-old forward scored his 41st United goal in his 150th appearance as the Red Devils defeated Brighton and Hove Albion 2-1 in Saturday's Premier League fixture.

Southgate hailed Rashford, who has netted six goals in 31 appearances for England since debuting in 2016.

"Given that he's only 21, he will definitely continue to improve," Southgate said. "When you have a mindset like he has and a desire to be as good as he wants to be, then that will happen.

"He's a tremendous talent, we've known that for a long time and with us, he's scored three goals in the period after the World Cup.

"And he's showing great signs with his club of maturing and getting stronger and playing with the belief - and that is so important for young players."

Rashford has cemented his spot in United's XI, preferred ahead of Belgian striker Romelu Lukaku in Manchester.

"In the modern game, I think flexibility, particularly in those attacking positions [is so important]. When I think of United from years ago with [Cristiano] Ronaldo, [Wayne] Rooney, [Carlos] Tevez, all three of them would pop up in different areas of the pitch.