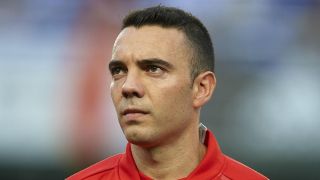 Julen Lopetegui would not be drawn on whether Iago Aspas had made a successful claim for a starting spot at the World Cup after the Celta Vigo forward fired a late winner in the 1-0 victory over Tunisia.

Spain were shy of their sparkling best in Krasnodar but Aspas – on the back of a prolific 22-goal season in LaLiga – rifled home with a precise low strike in the 84th minute after Diego Costa appeared to have passed up the opportunity.

Costa and Aspas started the 1-1 draw against Switzerland last weekend and Rodrigo led the line without reward against an enterprising Tunisia line-up on Saturday.

As such, Lopetegui has given little away ahead of the keenly anticipated Group B opener against Portugal in Sochi – a state of affairs with which he is content.

"Nobody starts on a disadvantage versus the others," he told a post-match news conference when asked whether Aspas had decisively pushed his case.

"At the end it's a decision you make thinking about the best solutions for the team.

"It's true you have to see the fitness of the player and whether he comes in in the right moment. Anyway, I wouldn't focus the discussion on the forwards."

Moving on to the broader assessment he was more minded to give, Lopetegui was mainly pleased to see his players come through unscathed.

"It was a difficult match because during the first half we weren't at the pace we wanted to be at," he added.

"We lost many balls and Tunisia took advantage of this.

"We finished the game in a good way because we didn't have any injuries and we could give minutes to many players. Now there are six days to fine-tune and sharpen the XI."