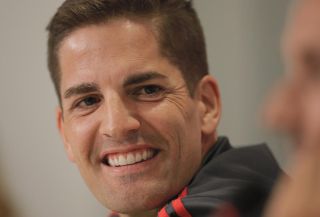 Head coach Robert Moreno has set Spain the target of an unblemished 30-point haul from their Euro 2020 qualifying matches.

They have already won all four of their matches in Group F so far – scoring 11 goals and conceding four – ahead of Wednesday’s trip to Bucharest to take on Romania.

Despite their impressive start to the campaign, this is a fixture La Roja have struggled with in recent times, having failed to win there in their last six matches, drawing three and suffering three losses.

“If we win we will have 15 points. We will not have qualified,” Moreno told a press conference. “Until we have achieved it mathematically there will be nothing to celebrate.

“We want to be first. A draw would be a good result but our goal is to make 30 points in the qualifiers.”

Moreno added: “I haven’t made a decision regarding the line-up. The players will know just before the game. We like that the players have the feeling of being in the XI. Everyone should feel they can participate.”

Moreno officially took over as head coach in June following Luis Enrique’s decision not to continue in the role to care for his youngest child, but had overseen three qualifying matches as interim boss.

He said: “I am looking forward to it. I already felt the sensation of my debut when we played against Sweden and Malta.

“I want to do well in a game that will be difficult.”

Romania boss Cosmin Contra knows his players will need to play a “perfect match” to beat Spain, but would not rule it out.

“I always tell the players that I want to win,” Contra said at his pre-match press conference.

“We have to make a perfect match tactically and physically. Let’s have the courage to put them in trouble when we have the ball.”

Defender Vlad Chiriches added: “We know very well that we are meeting the best team in the group, with high-quality players.

“They will make it difficult but we need to rise to the highest level.”