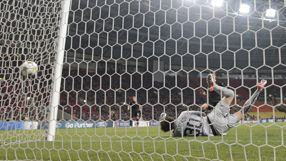 Pesyakov, who was in goal for Spartak's 3-2 home defeat by Celtic in this month's tie, suffered the injury in a 2-1 loss to Russian league leaders Anzhi Makhachkala on Saturday.

Spartak's first-choice keeper Andriy Dykan, who played in last month's 3-2 defeat by Barcelona, is sidelined with a shoulder injury.

Spartak's Spanish coach Unai Emery, however, expressed faith in 28-year-old Rebrov, who has seen little action for the Moscow club since joining last year and has never played in European competition.

"It's not like Rebrov has been without any match practice this season as he has played for our reserve team," Emery told reporters on Monday.

Nigerian striker Emmanuel Emenike, who scored both of Spartak's goals against Celtic and is the club's leading scorer this season, is a doubtful starter against Benfica with a sore back. "We'll make a decision if he could play tomorrow after tonight's training," said Emery.

Barcelona top the standings on six points, ahead of Celtic (four), Benfica (one) and Spartak (zero).