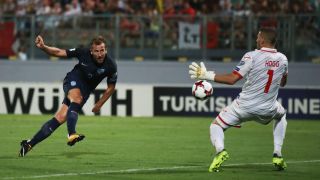 Tottenham striker Harry Kane has been voted England Men's Player of the Year for 2017.

Kane was the clear winner after receiving 75 per cent of the ballots from members of the England Supporters Club.

The 24-year-old made six appearances for Gareth Southgate's team in 2017, scoring seven goals to help England gain automatic qualification to the World Cup.

Kane captained the team in four matches during the course of the calendar year and is a considered a leading contender to wear the armband in Russia.

"It's always special to represent your country so to be voted as England's best player of 2017 from such a talented squad is a real honour after what was a memorable year for me personally," said the Tottenham star.

Congratulations to , who our fans have voted as the Men’s Player of the Year! January 22, 2018

"To play your part in reaching the finals of a World Cup is every young footballer's dream and I'd like to thank all of my international team-mates for the part they played in that journey.

"However, I'd especially like to thank the Three Lions' fans for their fantastic support both at Wembley and across Europe. Now here's to an exciting summer in Russia."

Great to win an award voted for by the fans. support home and away is always top class. Bring on the . January 22, 2018

Everton goalkeeper Jordan Pickford was named England Men's Under-21 Player of the Year.