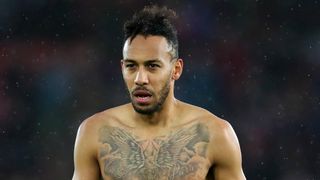 Arsenal's leading goal-scorer Pierre-Emerick Aubameyang had just 13 touches of the ball as the Gunners were thrashed 5-1 by Liverpool, and six of those came from kick-offs.

Aubameyang has scored 13 Premier League goals in 20 appearances this season but he cut a lonely figure as Unai Emery's men were pulled apart at Anfield.

Ainsley Maitland-Niles gave the visitors the lead after just 11 minutes but Liverpool's response was swift and decisive, Roberto Firmino scoring two goals in three minutes before Sadio Mane and Mohamed Salah scored to make it 4-1 at half-time.

Firmino scored again from the penalty spot in the second half to put the game well out of Arsenal's reach, while the normally lethal Aubameyang was left to reflect on a fruitless evening before being taken off 19 minutes from the end.

13 - Pierre-Emerick Aubameyang had just 13 touches in Arsenal's defeat at Anfield; six of which came from kick-offs. Lonely. December 29, 2018