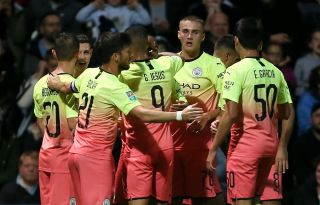 Manchester City began their quest for a third successive Carabao Cup triumph with a clinical 3-0 demolition of Championship high-flyers Preston.

Raheem Sterling set up a comfortable night with a fine solo effort before Gabriel Jesus doubled the lead with a crisp strike.

A Ryan Ledson own goal put the holders three up and effectively ended the contest before the interval.

It was a result that was never in doubt, completely vindicating what had seemed a bold call by City boss Pep Guardiola to hand starts to both Eric Garcia, 18, and Taylor Harwood-Bellis, 17, at centre-back. For the latter it was a senior debut.

With full-backs Joao Cancelo and Angelino also featuring and Claudio Bravo playing in goal, it was a completely changed back unit. There was also an opportunity for Phil Foden in midfield but there were plenty of regulars involved with Sterling, Jesus, David Silva, Ilkay Gundogan and Bernardo Silva all starting.

Preston, third in the Championship, might have hoped to trouble City but, after making six changes themselves, were distinctly second best.

The hosts did have an early chance when a cross from Ledson almost found former Manchester United forward Josh Harrop but City soon took control.

Sterling’s runs repeatedly troubled the Preston defence and he had them backpedalling when he powered through in the 19th minute, wrong-footing three opponents before shooting past Connor Ripley with the aid of a deflection.

Jesus was denied soon after by an offside flag but the Brazilian celebrated in the 35th minute as he rifled home from a tight angle from a Sterling through ball.

Such an assured performance from the young man! 💪 @ericgm3— Manchester City (@ManCity) September 24, 2019

The third came three minutes before the interval when David Silva’s low ball was turned into his own net by Ledson.

Jesus and Garcia missed the target early in the second half before Preston had another good moment when Harrop squeezed a shot against the post. City also hit the woodwork when Foden clipped an effort onto the bar.

City cantered to victory, giving more game time to fit-again Benjamin Mendy and handing a debut to Adrian Bernabe along the way.

Jesus almost grabbed another late on but Ripley saved with his feet.