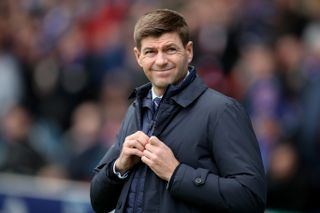 Steven Gerrard admits Rangers may have to knock Galatasaray out of the Europa League if he is to get his hands on the midfielder he desperately craves.

The Ibrox boss has made no secret of his wish to bolster Rangers’ engine room with another recruit as faces up to the daunting task of competing on four fronts this term.

But Gerrard – who has already made seven signings this summer – is still waiting for the green light from chairman Douglas Park to make his move ahead of Monday’s transfer deadline.

The financial fallout from the coronavirus crisis has complicated matters and the Englishman is aware restrictions may have to be placed on his budget the longer the Light Blue legions remain locked out of Ibrox.

And with a sum potentially rising to £10million on offer for reaching the Europa League group stages, Gerrard knows his transfer plans could hinge on his team’s ability to edge out Fatih Terim’s Turkish giants on Thursday night.

Speaking ahead of the play-off round clash, he said: “I think I’ve made it pretty clear what I feel we need.

“But I also respect the board’s position in the current climate and the situation that we’re in.

“I do think that depending on whether we qualify or not would depend on what we try and do in the final days.

“But I think that’s a question for people who are above me at the club.

“I can’t really answer that question right now but I’ve made it pretty clear what I feel we need to keep moving forward, to make sure that we don’t stand still.”

Rangers’ recruitment plans are not the only thing at stake against the Lions of Istanbul.

Updated coefficient! Let me know if anything looks incorrect always possible after EL qualifying rounds. My takeaway from this is that Turkey is trouble of losing that auto bid, like a lot of trouble. pic.twitter.com/gtTR184dck— UEFA Calculator (@UEFACalculator) September 24, 2020

Victory for Gerrard’s team could help Scotland overtake Turkey in the UEFA coefficient rankings and secure an automatic Champions League slot for the Premiership winners.

Gerrard said: “I think it will be a big boost to the country – something that we haven’t had for a long time.

“The teams in Scotland have worked ever so hard, chipping away to improve it.

“I think we’ve played our part so I’m very proud of the players and what we’ve done as a club to improve the coefficient.

“But the main priority is to always focus on ourselves. This is a huge fixture for us and it’s vitally important we get through it and come out victorious (on Thursday).”

Gerrard has already admitted his team will be the underdogs as they seek to battle through to the groups for the third year running.

The Super Lig leaders have travelled to Glasgow without former Barcelona and Atletico Madrid star Arda Turan but, with the likes of Radamel Falcao and his old Liverpool team-mate Ryan Babel in the Galatasaray ranks, the Ibrox chief is well aware of the quality his side will face.

“We here at Rangers have big respect for Galatasaray as a team, for all their individuals because they play at a real big level,” said Gerrard, who could welcome back Ryan Jack and Brandon Barker, but has a doubt over Cedric Itten after the striker picked up a knee injury in training.

“They have big experience in this type of competition.

“I think the main strength to Galatasaray’s team is the spine. The two centre-backs (Christian Luyindama and Marcao) are big, strong, powerful and quick and that filters right through to Radamel Falcao.

“So we have big respect for the team (on Thursday). We have no fear but we have huge respect.”