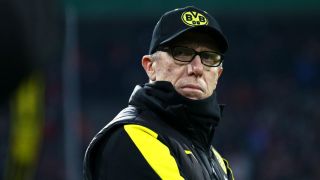 The Austrian side stunned their hosts at the start of the second half, Valon Berisha scoring twice in the space of seven minutes.

While Dortmund halved the deficit with a close-range finish from Andre Schurrle just after the hour, they will now have to score at least twice in the second leg to progress to the quarter-finals.

Stoger will hope for an improved display in the return fixture after seeing his side slip to their first loss in 2018.

"I didn't like a lot about this match," he told the media in his post-match press conference.

"The first ten-to-15 minutes I thought that we were pretty acceptable in the game, but this feeling got less and less. The team didn't keep the speed high. So the game for the opponent became easier.

"Salzburg adjusted more and more during the match. They became braver and gained more confidence.

"In several moments we had the feeling we could change something about the result. But, between these good stages, our performance wasn't very dedicated. I'm not happy with it."

Captain Marcel Schmelzer acknowledged Dortmund were comfortably second best against an impressive Salzburg side who have now gone 10 games unbeaten on the road in Europe.

"We lost deservedly. That just was not okay," he told Sky.

"There was a lot missing, especially in the first half. That meant our opponents became more courageous, because we allowed them to be.

"That we allowed this to happen at home is a no-go."