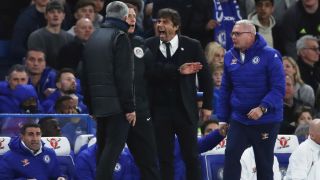 Chelsea head coach Antonio Conte hit back at Jose Mourinho, telling the Manchester United manager to "think about his own team".

Conte had highlighted the multiple injuries in his squad ahead of his side's 3-3 Champions League draw with Roma on Wednesday.

After United's 1-0 win at Benfica, Mourinho hit out at managers moaning about injuries.

Told of Mourinho's comments, Conte was unimpressed, telling the Portuguese tactician to stop worrying about his former club.

"If he is speaking about me, I think he has to think about his own team and start looking at himself, not others," the Italian said.

"He should think about his team."