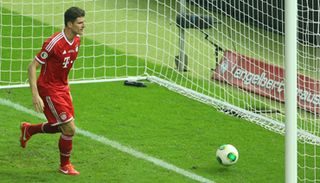 Gomez, 27, a former Bundesliga top scorer, lost his starting spot to Mario Mandzukic last season as Bayern won the domestic league and cup double as well as the Champions League.

"Yes, there have been rumours," Bayern CEO Karl-Heinz Rummenigge told reporters in reference to several Italian clubs' supposed interest in the Germany international.

"He will be training with the team as normal from Wednesday onwards [pre-season start], Rummenigge said, with new Bayern coach Pep Guardiola sitting next to him.

"Until today there is no official enquiry so Mario Gomez will start training on Wednesday and then we will see what happens," said Rummenigge.

Gomez joined the Bavarians in 2009 with his current deal running out in 2016.