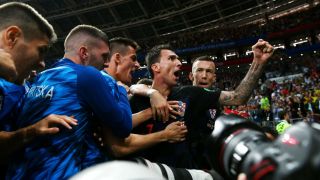 As seismic sporting shocks go, Wednesday saw one of the biggest in years.

Roger Federer, tennis' 20-time major-winning great, squandered a two-set lead and a match point to lose to Kevin Anderson in his Wimbledon quarter-final.

Federer's upset was a preview to the main event, it turned out. At Luzhniki Stadium, Croatia looked finished, a spent force, heading forlornly for the weird, sullen occasion that is the World Cup's third-place play-off. And although they were hardly playing tournament favourites in England, their fightback was worthy of sharing a day with Anderson's extraordinary tale.

This was a first semi-final at any event for England since 1996; for Croatia, it was their first foray into the last four since the fabled team of World Cup 1998. They have never been to a final at all. History was always going to be made in Moscow, which is just the way a game of this magnitude should be.

This was Croatia's best side since that Davor Suker vintage, a second 'golden generation' who humbled Argentina in the group stage, who battled from a goal down to see off Denmark and hosts Russia in the knockouts to reach this point. They have survived turmoil surrounding their Football Association, mounting expectations and two penalty shoot-outs. Theirs is an uncommon, unbreakable spirit.

It looked as though Gareth Southgate's motley crew of malcontents would be one step too far. Again, their goal came from a set-piece, for the ninth time at these finals. Kieran Trippier, not even a Tottenham regular until last season, further underlined the burgeoning comparisons with former England captain David Beckham by stroking home the Three Lions' first direct free-kick goal at a World Cup since Beckham himself in 2006.

Croatia had possession, as expected; Luka Modric was the man they looked to for inspiration, as expected. But a wild shot from Sime Vrsaljko, passed fit for this match late on, summed up a first half in which they looked anxious and bereft of ideas.

England were not quite at match point, but it felt as though the headlines were already being written when Croatia struck. Vrsaljko, showing why he was rushed back into the team after getting injured against Russia, bent a fine cross in from the right that Ivan Perisic met with a boot, steering the ball into the net despite Kyle Walker's best efforts.

4 - Ivan Perisic has scored four goals at the World Cup for Croatia - only Davor Suker (6) has scored more in the competition for them. Answer. July 11, 2018

The momentum shift was incredible. Modric and Ivan Rakitic suddenly began to control the middle, the ball coming back time and again against an England back three who looked frozen with anxiety in the bright Luzhniki lights, the men ahead of them unable to keep possession long enough to let them breathe.

Perisic, now level with Suker on four World Cup goals, later hit the base of the post, Harry Kane missed a header, and chances came and went for John Stones and Mario Mandzukic in extra time. Then, England's defence froze again. A simple header from Perisic, a momentary lapse from Stones, and Mandzukic had fired Croatia into the final for a chance to avenge their 1998 exit at the hands of France.

England defied expectation and united a fractured nation in reaching this stage, and Southgate must take enormous credit for that. But this Croatia, like Kevin Anderson in London hours earlier, refuse to accept they can be beaten. The greatest achievement in their short football history is secure, the pinnacle of the game just 90 minutes away.