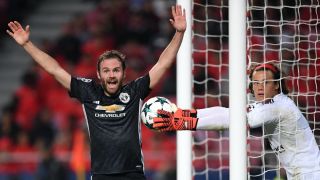 Jose Mourinho was aware that Benfica's young goalkeeper Mile Svilar "risks a lot" and targeted him at set-pieces as the 18-year-old gifted Manchester United a 1-0 win with a horrible second-half error.

The Belgian made history by becoming the Champions League's youngest ever goalkeeper at 18 years and 52 days, surpassing the record set by Real Madrid and Spain great Iker Casillas.

But it proved to be a nightmare showing from Svilar, who looked uncomfortable at set-pieces throughout and ultimately handed United the win in Group B.

Marcus Rashford curled a free kick into the area from 40 yards out on the left flank with 26 minutes to go and Svilar backed over his goal-line with the ball in his grasp, giving the officials an easy decision to make as Mourinho's plan paid off.

"I knew how good he was and I told the players how good he was," Mourinho said to BT Sport. "But we had stats and information about set pieces, so we needed to make him uncomfortable.

"So at corners we tried to crowd him and put him under pressure, and from free-kicks we knew he risks a lot. A lot.

"Only top keepers risk like he does. We got lucky."

One sour point for United was a seemingly innocuous injury to Rashford 16 minutes from the end and Mourinho confirmed that the England international felt something in his knee.

"It was something in his knee," Mourinho said. "I thought it was cramps because he ran so much, but it was his knee. Hopefully it's nothing important."

The win was ultimately fairly straightforward for United, with Benfica offering very little attacking threat throughout the game.

And Mourinho commended his team's defence, saying that sometimes he is made to feel that being solid at the back is a "crime".

"We were in control," he added. "David de Gea did not have one save to make.

"I never felt we could concede a goal and were solid defensively. Sometime I feel being good defensively is a crime, but that is a way of getting results.

"We are one point from qualifying and one victory away from winning the group with two games at home to play. A good game, solid.

"We knew the Benfica pressure could not stay for 90 minutes. The amazing defensive work Liverpool did against us, Benfica could not do that for the whole game.

"Without any pressure, we knew the goal would arrive. We forced a little more and with quality and sharpness we could have killed the game more."