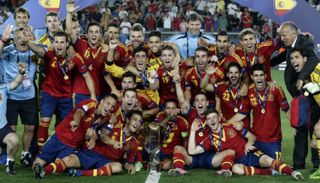 The defending champions had little difficulty in breaking down Italy's unusually hesitant defence as Barcelona's Thiago scored with an easy header in the sixth minute, a close-range drive in the 31st and a penalty in the 38th.

Thiago became the first player to score a hat-trick in the final since the format was changed to a one-off match in 1994. The event began in 1976 and the first finals were held two years later.

Italy briefly lived in hope when Genoa forward Ciro Immobile chipped calmly over Spain goalkeeper David de Gea in the ninth minute to equalise at 1-1. It was the first goal the Manchester United keeper had conceded in the tournament.

Spain's Isco of Malaga added a fourth Spanish goal from another penalty in the 66th minute when he sent Italy goalkeeper Francesco Bardi the wrong way.

Striker Fabio Borini added a second Italian goal in the 80th minute with a powerful low strike from the edge of the area after a deft one-two with Lorenzo Insigne, but it came too late against the superior Spaniards.

Spain coach Julen Lopetegui was most pleased with the manner of his team's performances throughout the tournament.

"We are happy, not only for the victory but for the personality the team showed," he told a news conference.

"I think the players decided that individual talent without the strength of the group is wasted. I believe that was the key."

"Perhaps the only shortcoming for my players was their lack of experience because in matches like this you need to have experience," Mangia said.

"They have less experience than the Spanish players. My players also have great qualities."