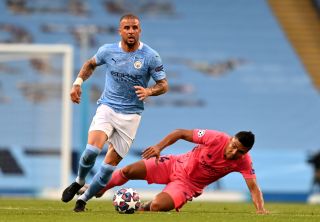 Kyle Walker believes Manchester City now have one of the best chances they will ever get of winning the Champions League.

City claimed their place in the quarter-finals of this year’s competition with a memorable victory over Real Madrid on Friday.

The remainder of the event will be played as a mini-tournament in Lisbon with all ties over one leg, a result of changes enforced by the coronavirus pandemic.

Walker thinks the new format could suit City, who will face Lyon at the Jose Arvelade Stadium next Saturday.

“It’s probably one of the best chances we are going to get,” the England right-back said. “We have been in the quarter-finals before but, now with just one game, it’s going to be a very different approach.

“It’s going to be a tough challenge but we are fully up to the task. We’ll go there with a good gameplan and hopefully win the games.”

City beat Real 2-1 at the Etihad Stadium in the long-delayed second leg of their last-16 tie to complete a 4-2 aggregate victory over the 13-times winners.

It was a deserved success for the Premier League side and Walker feels beating such storied opposition was a landmark achievement.

The 30-year-old said: “We still have some steps to be on top of Europe. The job isn’t done. We have two tough games before the final.

“But I think it’s a great step in the right direction for this team as a whole, to beat Real Madrid twice – once at the Santiago Bernabeu and once here, and being the better team in both games”.

Gabriel Jesus, who set up City’s first goal for Raheem Sterling and added the second himself in an outstanding display, also has his eyes on the prize but is taking nothing for granted.

The Brazil striker said: “Obviously, we have the right to dream and we should start dreaming about winning the Champions League. I’m a dreamer and I see myself with the trophy in my hands.

“However, the reality is different. We need to work really hard and show our willingness to go through in every match.”

Manager Pep Guardiola, who won the Champions League twice as Barcelona boss, sees the remainder of the competition more akin to a major international tournament than the event he is used to.

He said: “It’s quite similar. Before it was last 16, quarter-finals, semi-finals two games. Now every game is a final. You are in or out.

“We will see a final against Lyon. No more chances, no mistakes.”

Guardiola, who has won two Premier League titles and four domestic cups with City, denies he needs to win the Champions League to cement his legacy at the club.

He said: “Honestly, when I leave Manchester City I will always be grateful to have been here. It does not depend on winning this competition.”