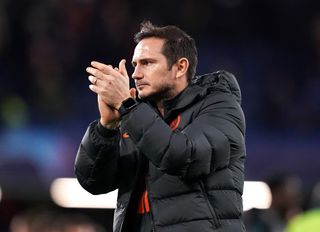 Frank Lampard had many memorable nights during his 13 years as a Chelsea player, but not even he could remember one as dramatic as the 4-4 draw with Ajax.

The Blues came from three goals down to snatch a point from a spellbinding Champions League encounter against last season’s semi-finalists.

They scored two own-goals and two penalties while Ajax had two players sent off on a chaotic night at Stamford Bridge.

Having trailed 4-1, the Blues battled back to level and then Cesar Azpilicueta thought he had scored a winner, only for VAR to step in.

Nevertheless, a point from a breathless match keeps Chelsea firmly in the race to qualify from Group H.

“I’m relieved from the position we were in at half-time, I told the players we could still draw 3-3 or win it,” said the Chelsea boss.

“I felt we were still in the game, we just needed a bit more in the final third and to lift the stadium.

“But then I’m probably a bit disappointed, in the last 10 minutes, not to win it.

“Today was just a mad one, there are not too many I can compare it to from my day, with the VAR which is a new animal, and the red cards. I can’t dissect any of that because I need to watch it back.

“But take all that out of it, and the spirit and the character was something I love. We need to tighten up for sure, but with that spirit we can go places.

“We had some mad nights and great nights here over the years, but this is certainly up there.”

Ajax took a shock lead inside the opening two minutes when Tammy Abraham inadvertently diverted a Quincy Promes free-kick into his own net.

But moments later Jorginho equalised from the penalty spot after a foul on Christian Pulisic.

However, Promes headed the second before Hakim Ziyech’s free-kick beat Kepa Arrizabalaga, came back off the post and hit the keeper full in the face before bouncing in.

It was four 10 minutes after half-time thanks to Donny Van De Beek’s low drive, but the comeback began when Azpilicueta tapped in at the far post.

Then, in another crazy 60 seconds, Daley Blind was shown a second yellow card for fouling Abraham and Joel Veltman followed him down the tunnel for handling Callum Hudson-Odoi’s shot.

Stamford Bridge was rocking as Jorginho rolled in his second penalty of the night, and it was pandemonium moments later when substitute Reece James lashed home from a corner to equalise.

VAR ruled out Azpilicueta’s dramatic late ‘winner’, spotting an Abraham handball among the pinball in the Ajax box leaving the Dutch champions suddenly grateful for a point.

Ajax manager Erik Ten Hag said: “I’m very disappointed. I think we could have had four points from our two games against Chelsea but we only have one.

“Some decisions went against us, but we played magnificently. One moment everything changed.

“First Daley Blind, then Veltman, and a penalty, I felt we got punished many times.”