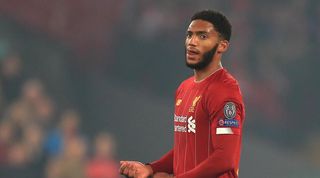 Gomez fell behind Joel Matip in the centre-back pecking order at Anfield earlier this season, but has recently returned to the starting XI alongside Virgil van Dijk.

Having only kept two clean sheets in their first 15 Premier League games this term, Jurgen Klopp's side have now gone five matches without conceding.

And Alexander-Arnold believes Gomez has done an "unbelievable job" since being restored to the team.

"That [the lack of clean sheets] was something that was frustrating for us because it wasn't as though we were conceding three or four a game, it was always just the one goal that we were conceding. I think over the last few weeks we've really matured as a group.

"Obviously Joe [Gomez] coming in as well and doing an outstanding job and proving why we've got four world-class centre-halves that can play at any given moment.

"We've seen over the course of the season already that all four of them can play together and play to a world-class level, which is obviously good for us.

"I think Joe coming in for us has been massive and he's shown the manager that he's ready to play whenever. He's done an unbelievable job.

"He's just as solid as anything really. Always there on the cover, always getting the blocks in, his last-ditch tackles are unbelievable.

"The pace and the power that he has is almost like an attacker. He can go toe-for-toe with any attacker and we'd all be confident that he could be faster than them, stronger than them and be able to hold his own.

"For us, that's massive in terms of the confidence that he gives us as a back four and the players in front. It's a great partnership between him and Virg. They have a good bond on and off the pitch, that's something that's important."

Liverpool travel to north London to face Tottenham on Saturday.