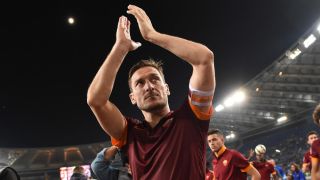 The career of Francesco Totti finally came to an end on Sunday.

The 40-year-old bowed out of professional football in front of a sell-out crowd at Stadio Olimpico after helping his beloved Roma to finish the season with a dramatic 3-2 victory over Genoa.

Totti won Serie A and the World Cup in a distinguished career that was, regrettably, short on trophies, but that has done little to diminish his standing in the eyes of the Roma and Italy faithful.

His 25-year senior career has nonetheless produced some remarkable statistics. With the help of Opta, we examine the numbers behind the playing days of a man described by Diego Maradona as the best footballer he had ever seen.

8827 – The number of days that have passed since Totti made his Roma debut against Brescia, at the age of 16 years and six months

307 – The number of goals scored across those matches, giving him an average of better than a goal every three games.

250 – Totti's goal tally in Serie A, 25 more than AC Milan great Gunnar Nordahl and behind only record-holder Silvio Piola (274). The rest of the current Roma squad combined has scored 249.

180 – This is the number of players to have taken part in Serie A this season who were not born when Totti made his debut. That's 33 per cent of all to have played in 2016-17.

58 – Totti made 58 appearances for Italy, scoring nine times. He netted once in Italy's World Cup triumph in 2006 and also made four assists, more than anyone else in those finals.

38 – Against CSKA Moscow in November 2014, Totti became the oldest player to score a Champions League goal, at the age of 38 years and 59 days.

23 – Nobody but Totti has managed to score at least once in each of the last 23 Serie A seasons. Only Maldini can match the 25 he has played in overall.

1 – The number of league titles Totti won. He scored 13 goals to help Roma to the Scudetto in 2000-01, when they finished two points ahead of Juventus. He has been runner-up 10 times since. Along with that title, he has won two Coppe Italia, two Supercoppe and the World Cup.

For him. For Roma.The Giallorossi win 3-2 in 's final game, and secure automatic qualification for the group stage. May 28, 2017