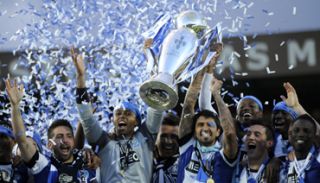 Porto stayed undefeated to grab the seasons' most sought-after domestic trophy with a dramatic comeback in the last few weeks, snatching the title away from arch rivals Benfica, who were four points ahead just three rounds ago.

Argentine playmaker Lucho Gonzalez fired in from the spot after 23 minutes and Colombia's Jackson Martinez extended the lead in the second half to give Porto a third consecutive title.

"This is Porto: quality, persistence and hard work. We won in the key moments," overjoyed Porto coach Vitor Pereira told Portuguese television, shortly before brandishing the league trophy in his hands.

"I am proud and we fully deserved the win."

Pacos were reduced to ten men when Ricardo was sent off after 22 minutes while Porto full-back Danilo was also dismissed in the second half but the home side never really threatened.

Second-placed Benfica beat Moreirense 3-1 at home but ended the season one point behind the champions.

Porto have now won 14 out of the last 20 championships.

The climax to one of the most finely balanced Portuguese championships was Porto's stoppage-time win over Benfica at the Dragao stadium a week ago, which put them in command in the title race.

"This sure was one of the hardest championships we have won. A lot of people thought we had lost the title but we never believed that," goal-scorer Gonzalez said.

Coach Pereira, who also won the title last year, salvaged a season which threatened to end in disappointment after Porto were knocked out in the last 16 of the Champions league by Malaga and out of the Portuguese cup by Braga.

Instead, it was their rivals Benfica whose season unravelled in the space of a week, after they also suffered a last-gasp defeat at the hands of Chelsea in Wednesday's Europa League final.

At Benfica on Sunday, the eagle that traditionally circles their Luz Stadium before every home match fled the ground instead of landing on the pitch as it usually does.

It seemed a bad omen for the Lisbon club, who suffered disappointment despite beating Moreirense. Their only hope of silverware this season is now the cup final next weekend against Vitoria Guimaraes.