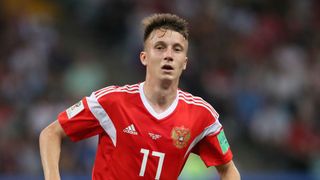 Monaco vice-president Vadim Vasilyev says the Ligue 1 club have won the race for Aleksandr Golovin, beating off competition from Juventus and Chelsea.

Golovin emerged as one of the stars of the World Cup as Russia surpassed expectations to reach the quarter-finals under Stanislav Cherchesov.

His wonderful free-kick in the opening game of the tournament against Saudi Arabia wrapped up a 5-0 win for Russia, shooting Golovin to the top of many club's shopping lists.

Juve appeared favourites to land the 22-year-old playmaker, but Vasilyev claims Golovin will ply his trade in Ligue 1 after agreeing a five-year deal with Monaco.

"They [the negotiations] were complicated. Until the last moment I was not sure that I would be able to complete this transfer.

"At a meeting with one of the leaders of the Turin club in early May of this year, I heard that Aleksandr's transfer to their team was a decided deal.

"However, our main competitor was Chelsea.

"I believe that Monaco offered more favourable conditions for the club and a more understandable project for the player.

"Chelsea is a top club, who I treat with great respect, but the midfield is overloaded. In my opinion, Aleksandr can definitely play in any of the leading clubs in the world. But it will take him some more time, he is in a transition stage.

"Monaco can be a springboard for Golovin, look at our formers players who now perform in leading European teams."