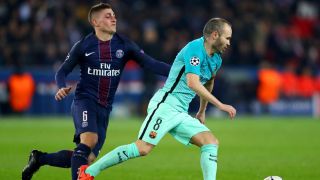 The agent of Marco Verratti has called for talks to be held with Paris Saint-Germain over the midfielder's future after the Coupe de France final.

The Italy international continues to be linked with a possible move to Barcelona at the end of the season following a relatively frustrating campaign for Unai Emery's side.

PSG have already won the Trophee des Champions and Coupe de la Ligue but suffered a humbling Champions League exit to Barcelona and appear set to lose their Ligue 1 title to Monaco.

Verratti's representative, Donato Di Campli, does not wish to rush into discussions but has made it clear that he wants to speak with the club after they have played the Coupe de France final against Angers on May 27.

"I don't feel like saying anything," he told Premium Sport. "A lot of wrong things have been said. I want to keep things calm as PSG aren't in the most happy of moments.

"We'll ask for a meeting with the club to discuss Marco's future. The club have said that Marco won't leave so we have to respect the will of the club.

"But we will make a point of the situation after the Coupe de France final."

Verratti's future was cast into doubt after PSG suffered a 6-1 second-leg thrashing to Barca in their Champions League last-16 tie, after a 4-0 win in the first leg.

A 3-1 loss to Nice on Sunday has also put a huge dent in their hopes of defending their domestic title, with Monaco three points clear at the top and with a game in hand.

The 24-year-old stated after that defeat that PSG are showing signs of progress, however.

"If Paris are not champions, we will not have achieved what we had in mind at the start of the season," he said.

"But I think PSG are always a team that grows, I feel better after this season."