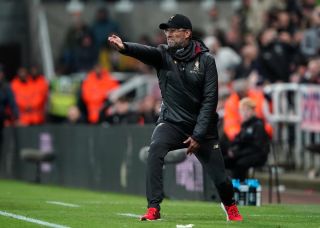 Liverpool manager Jurgen Klopp is not a fan of allowing video cameras into the changing room and would quit if the club attempted to film any behind-the-scenes footage.

After Wednesday’s Champions League victory over Red Bull Salzburg the Austrian club shared a clip on social media of their coach Jesse Marsch’s half-time team-talk at Anfield, in which the animated American switched between English and German as he tried to get his message across in an expletive-laden speech.

There is a growing trend for clubs to invite television crews into their inner sanctum and the Reds were one of the first to do it with the 2012 ‘Being: Liverpool’ documentary.

It focused on their first season under Klopp’s predecessor Brendan Rodgers, who coincidentally returns to Anfield for the first time with Leicester on Saturday, but while offering some fly-on-the-wall insight was often cringeworthy and was widely criticised by, among others, former players.

Rodgers subsequently admitted the documentary, which famously featured him admonishing a young Raheem Sterling on the training ground in front of his team-mates, and the memorable ‘three envelopes’ speech in which he claimed he had written down the names of three players he said would let them down over the impending campaign.

“If LFC put a video of me out in that situation, then I would leave the club. That’s the truth and that’s all I will say about it,” said the German.

The Liverpool manager has to deliberate considerably more on whether to bring goalkeeper Alisson Becker back into the starting line-up for the visit of Leicester.

A calf injury in the opening match of the season has sidelined the Brazil international ever since but he was back in full training on Thursday, leaving Klopp with a conundrum as he is keen to preserve the goalkeeper’s long-term fitness.

“With Alisson it is still, ‘maybe, maybe not’. Yesterday he trained with the team for the first time. He looked really good, but we will see,” said the Reds boss, who confirmed he will be without central defender Joel Matip for the second successive match.

“We have to talk to different people before I make a decision about that.”

Third-placed Leicester pose a considerable threat to the Premier League leaders, even if much of the pre-match conversation has been about Rodgers’ return.

Klopp hopes the Northern Irishman gets a suitable welcome after almost winning the league with them in 2014.

“I hope from the fans the reception will be OK. From my side it’s fine. All the issues from a couple of years ago, when we started living in his house, are sorted,” said the manager, who currently rents Rodgers’ house in Formby,

“We love living there. We pay our rent for him, so I’m not sure he has to work but he still does. You’re welcome!

“He’s doing really well. I’m not surprised to be honest. I knew when I came (to Liverpool) that he was not the reason that things didn’t work out.

“And since then he did an incredible job at Celtic and then Leicester, rebuilding a lot of the players who were there before him. Good signings as well, and a brilliant team.

“The reception I think will be good, from my side and from the supporters as well, but it’s still not a friendly game and we want to make sure we are there to perform as well.”

A decisive factor in the outcome will be how they handle a resurgent Jamie Vardy, who has scored seven of Leicester’s last 11 goals against them in just nine appearances.

“It feels like if someone put a ball behind me now, Vardy would be there. He is always on the shoulder,” said Klopp.

“But in general he is incredible, for years already and if he gets the service he will be a proper threat.”

“Vardy always scores so we have to make sure this game he will not score and we try to take all our chances – that will be the key,” said the Senegal international.