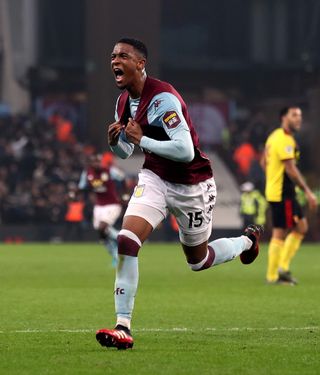 The defender grabbed a fortunate deflection on Ezri Konsa’s shot in the fifth minute of stoppage time with virtually the last touch of the game to snatch a 2-1 victory.

Douglas Luiz had earlier come off the bench to level in the second half, just as Villa looked like they would be plunged into further trouble.

It cancelled out Troy Deeney’s opener as Watford’s six-match unbeaten in the top flight was ended.

Victory – just Villa’s third in 11 Premier League outings – moved them up to 16th and two points clear of the drop zone while the Hornets slipped back into the bottom three.

There was little sign of the late drama to come in the early stages though.

Watford’s eight clean sheets this season is only bettered by leaders Liverpool, and Villa rarely looked like finding a breakthrough.

The hosts failed to test Ben Foster while Watford, despite decent possession, could not find a way through during a combative but forgettable opening.

Anxiety was rife among the home fans, with Villa having lost three of their previous four games at home and conceding 13 goals.

It took until the 30th minute for Villa to have the game’s first serious shot, Matt Targett’s mis-hit straight at Foster, before Anwar El Ghazi drove over soon after.

But the game got the goal it so desperately needed when the visitors struck seven minutes before the break.

Their attacking threat had been blunt but the Hornets carved out a fine opening when Gerard Deulofeu exchanged passes with Abdoulaye Doucoure on the right. The winger skipped to the byline and stood up a cross for Deeney to power in a header from five yards.

Villa, having won just two of their previous 10 league matches, were rattled and Deulofeu hit the side netting after breaching the backline again.

Smith’s side needed a response and Kortney Hause headed over five minutes after the restart.

The defender drilled wide from distance before Pepe Reina bailed Villa out after 55 minutes.

Adam Masina’s cross found Deulofeu and his scuffed volley was parried by Reina straight to Deeney, but the AC Milan loanee redeemed himself with a superb block to deny the Watford captain a second.

It was hard to see where a Villa leveller was coming from as they continued to live dangerously at the back and struggled to create going forward.

But, almost out of the blue, Villa finally equalised after 68 minutes.

Jack Grealish, again Villa’s best player, was at the heart of it when he fed Targett on the left and the defender’s shot was parried by Foster for Luiz to smash in at the far post.

Villa finally had some momentum but dogged Watford defending kept them at bay until the fifth minute of stoppage time.

They failed to deal with a deep free-kick and when the ball ran to Konsa, his shot clipped fellow defender Mings to fly in.