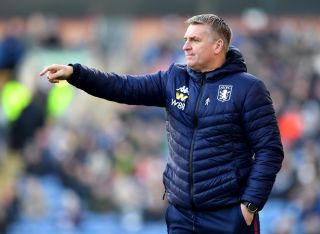 Aston Villa’s new teenage striker Louie Barry has set his sights on making his first-team breakthrough by the end of the season.

It is understood Villa splashed out £1million on Barry during the recent transfer window, luring the 16-year-old away from Barcelona just six months after he had joined the Catalan giants from West Brom.

Boss Dean Smith has already hailed Villa fan Barry as “a bright young kid” with “an awful lot of potential”.

Although Smith has claimed Barry “is an academy signing, first and foremost”, the youngster has made it clear he is fighting for the first team.

Speaking to Birmingham Live, he added: “What I want to do first at Villa is play really well and go up the ranks.

“My main ambition is to be in the first team by the end of the season. Dean Smith was excited for me to come in. I have spoken to all of the first-team players.”

Smith, meanwhile, has been hit with another injury scare to one of his main forwards.

Keinan Davis returned from a three-month layoff after a hamstring problem with substitute appearances in the Carabao Cup semi-final second-leg victory over Leicester and the Premier League defeat at Bournemouth.

Davis played in the Under-23s on Monday, while the rest of the first team are enjoying the winter break, only to limp off after 25 minutes against West Brom with what is understood to be another hamstring issue.

Should Davis again be sidelined for any length of time, it will leave Smith with just two strikers for the remainder of the season in recent recruits Mbwana Samatta and Borja Baston, with only youngsters Indiana Vassilev and Barry as back-up.