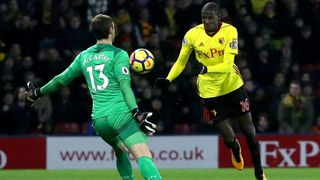 Abdoulaye Doucoure scored a controversial last-minute equaliser to secure a 2-2 draw for Watford as Southampton's Premier League winless run was extended to 10 matches.

A first-half double from James Ward-Prowse had put the Saints in the driving seat, but Andre Gray cut the deficit early in the second half and Doucoure got the leveller at the death, appearing to use his hand to do so.

It added to Mauricio Pellegrino's misery as his side's poor form continued, though Watford themselves have won just once over same period of Saints' top-flight winless streak.

Having opened his account for the season in last weekend's FA Cup win over Fulham – setting up a fourth-round clash with the Hornets – Ward-Prowse picked up where he left off.

The midfielder broke the deadlock after 20 minutes as Southampton sought revenge for September's 2-0 loss to the same opponents at St Mary's Stadium.

Pellegrino's men continued to impose themselves on the game and, after Dusan Tadic and Wesley Hoedt had been thwarted by Heurelho Gomes, Ward-Prowse was on hand again to cap a swift counter-attack with a straightforward finish.

Watford fought back after the break, with Gray nodding in and Doucoure stealing the headlines in more ways than one, leaving the visitors to wish VAR was in use.

FT | 2-2 SouthamptonGray and Doucoure goals after the break peg back the Saints, who led via a first-half Ward-Prowse double. Listen live ⤵️ January 13, 2018

Southampton threatened early on but saw a promising attack ended by an offside flag as Shane Long's shot forced a reflex save from Gomes.

The hosts badly fluffed their lines to ensure a dangerous foray into the Saints box yielded no reward, with  Doucoure's cutback miskicked by Gray before Daryl Janmaat's follow up was blocked, the same player then flashing a powerful drive just over the crossbar.

But, having failed to make that pressure count, the Hornets were punished at the other end when Ward-Prowse coolly slotted home from inside the box after good work from Long.

A speculative Hoedt effort from long range gave Gomes yet more work to do and he was equal to it, as was Marvin Zeegelaar when the Dutchman had to block Long's attempt from the edge of the six-yard box.

But there was nobody there to save Silva's side when Long burst down the left to pick out Tadic, who in turn laid on a simple finish for Ward-Prowse.

Troy Deeney was introduced at the interval, marking his return to league action after a four-match ban following his dismissal against Huddersfield Town last month.

A much-improved Watford started to show signs of life early in the second half and Richarlison had a shot blocked before finally they got their reward after 58 minutes.

Janmaat's rasping drive was tipped onto the bar by Alex McCarthy, who got no help from his defence when the ball fell for an unchallenged Gray to nod in.

Molla Wague then mistimed his jump when well positioned to connect with substitute Roberto Pereyra’s delivery as Watford continued to turn the screw.

Pellegrino sent on Mario Lemina as he looked to stem the tide and Southampton did initially stabilise, helping to quieten the expectant home crowd until Doucoure had the final say, turning in Deeney's header across goal and evading the attentions of referee Roger East.