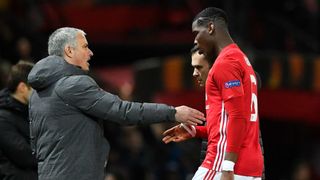 Jose Mourinho blasted the "enemies" that set Manchester United's fixtures and predicted a Premier League defeat at Middlesbrough as his fatigued side lost Paul Pogba and Daley Blind to injury.

United progressed to the quarter-finals of the Europa League on Thursday as Juan Mata's goal secured a 2-1 aggregate win over Rostov, but Mourinho was left frustrated as Pogba and Blind hobbled off.

And the Portuguese manager is expecting his depleted team to lose against struggling Boro at the Riverside due to their busy schedule, having played Chelsea in the FA Cup on Monday before facing Rostov.

"I can imagine some people think we should play better and score more goals and have less difficulties to beat these opponents, but the reality is that we have lots of things going against us.

"We have to fight. The boys are amazing boys. We'll probably lose the game on Sunday, but we'll try our best."

Mourinho blamed fatigue for the injuries to Pogba and Blind, again criticising the schedule as he lost two key players.

"Paul has a muscular injury," he said. "Daley, I don't know. I'll have to see what happened. Fatigue has a price.

"I will remember forever when I spoke to the UEFA delegate in Rostov: he told me that if any player gets injured then the insurance pays, so the pitch is not a problem.

"The people that decide the matches for us on the Monday and the Sunday probably think the same: if they are injured, they are insured."