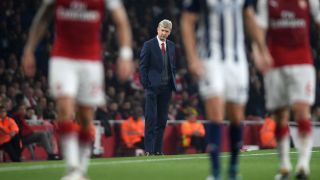 Arsene Wenger has described Arsenal's recent fixture list as "cruel" after the Gunners were scheduled to play in the Premier League on Monday ahead of a Europa League trip to Belarus.

A brace from club-record signing Alexandre Lacazette earned the north-London side a 2-0 victory over West Brom at Emirates Stadium.

But the timing of the match has left the team with a limited opportunity to recover, prepare and travel to Eastern Europe for the Group H fixture against BATE Borisov.

"I have a decision to make and at the moment I would say that the schedule for us is a bit cruel," the manager said of his next team selection after the win over the Baggies.

"We played tonight, we play in BATE Borisov on Thursday night and play Sunday at 12 o'clock here," he added, referring to the Premier League game against Brighton and Hove Albion at the Emirates Stadium this weekend.

"When you look at the schedule over the weekend I think there was some room for us to be scheduled differently, but we have to accept it and we want to go to Borisov with a good team. I will go with a team of senior players and certainly with a young bench."

What sort of side could we see on Thursday night?The boss discussed that after ... September 26, 2017

Asked if Arsenal would discuss the situation with the league, Wenger replied: "There is no need to talk to the Premier League about that because it's the television that decides, but, for example, Brighton v Newcastle could have been played on television on Monday and we could have played on Sunday.

"So for us the time is very short, but television decides and I don't complain about that.

"But what I want to say about my team selection is that it has an impact for me for the Thursday and for the Sunday game, because we have another home game and it's very important we have a strong record at home."

Arsenal, who finished fifth last season, opened their Europa League campaign with a 3-1 win over Cologne at Emirates Stadium and are seventh in the Premier League, with three wins, one draw and two defeats from six matches played in 2017-18.