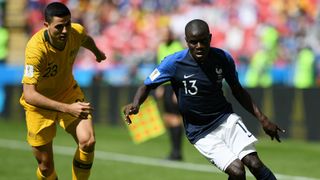 The midfielder put in a superb performance in a 2-1 victory over the Socceroos, where a penalty netted by Antoine Griezmann and an own goal from Aziz Behich got the Euro 2016 runners-up off to a perfect start.

France didn't have it all their own way in the match though and Kante had to work hard in the middle of the field, where he dictated the tempo of the game with calm and controlled play.

While Kante didn't make the headlines, Wenger praised the 27-year-old's involvement when speaking to beIN Sports.

"He is one of the most influential midfielders I've seen play football. He constantly makes simple decisions and never overcomplicates it," the Arsenal icon said.

Wenger, who left the Gunners at the end of the 2017-18 season after 22 years at the helm in north London, also revealed he attempted to sign Kante twice, including before he was brought to the Premier League by Leicester City.

"Have I looked to sign Kante? Yes. When he was in France and when he was at Leicester," he added.

"I cannot explain everything [about why he preferred Chelsea] but it is quite obvious when you look at where he has gone.

"Was it the money? I do not want to talk about that. Transfers are transfers - you cannot explain absolutely everything."

Kante has won the Premier League and FA Cup in his two seasons at Chelsea and is widely being linked with a return to France this summer to join Ligue 1 champions Paris Saint-Germain.