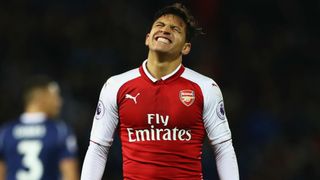 Alexis Sanchez's future should be resolved imminently amid a reported transfer tug-of-war between Manchester United and Manchester City, according to Arsenal manager Arsene Wenger.

The Chile international entered the final six months of his Arsenal contract at the start of January and had been expected to move to City, with Sanchez said to be keen to join up with Pep Guardiola once again.

But United have emerged as genuine rivals to City in the pursuit of Sanchez, with Jose Mourinho's side reportedly willing to meet Arsenal's asking price and secure an immediate transfer.

And, although Wenger gave no clues as to where Sanchez will end up, he believes movement on the matter will come soon after he left the attacker at home for Arsenal's trip to Bournemouth on Sunday.

When asked whether news was imminent, Wenger told Sky Sports: "Yes, [but] don't read too much into it because I don't know what way it'll go. You want to focus on the players who are on the pitch and can do well for the club.

"He's being vague at the moment, the situation is not completely decided one way or the other. I left him at home."