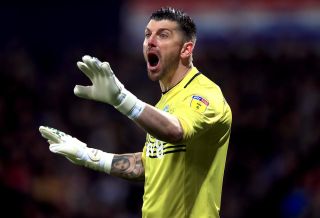 Sheffield Wednesday’s Keiren Westwood has pleaded with fans to halt their campaign of online abuse aimed at the out-of-favour goalkeeper.

Westwood, 35, has not featured for the Sky Bet Championship side since November, prompting rumours of a bust-up with boss Garry Monk.

In an emotional statement posted on Twitter, Westwood, who referenced the game’s recent bid to promote mental health awareness, has called for the ‘trolling’ to stop and denied he had fallen out with his manager.

Being trolled online is never a nice experience. With the tragic events recently it’s given me the courage to speak out to put an end to the online abuse I’m receiving simply for doing my job. Clarity is important. Enough is enough. #MentalHealthAwareness#footballmentalhealthpic.twitter.com/41RhgG2mfF— Keiren Westwood (@WestwoodKeiren) February 17, 2020

Westwood said: “With all the rumours, lies and accusations being said about me online, I feel obliged to clear my name and defend myself.

“I feel personally it’s becoming too much to handle and it is getting out of control.

“The manager and I have not fallen out. We had a conversation man to man and it was fine.

“I’m very experienced to know these things happen in football and it’s never anything personal.

“We had a good conversation, shook hands and left on good terms. I’m too far into my career to fall out with people.”

Westwood began the season as first choice under Monk, who was appointed as Steve Bruce’s successor in September, but played his last game in a 2-1 defeat at West Brom at the end of November with Cameron Dawson taking over between the posts.

“I know football inside out and I know a week is a lifetime in this world, so the hostility and animosity isn’t something I’m interested in having in my life,” Westwood said.

“There were no arguments or bad attitudes and definitely none of the rumours being banded about have occurred.

“We know we are in a slump and we need strong character to come out the other side.." #swfc— Sheffield Wednesday (@swfc) February 15, 2020

“The manager has made a decision, which I fully accept and respect and have done since the moment it was made.”

The former Carlisle and Coventry goalkeeper appeared to suggest that his spell at Hillsborough was coming to an end.

He said: “After six years at this wonderful club, I reflect on my time here with great pride, having played 179 matches, twice being player of the year, twice equalling the clean sheet record and making it into the PFA team of the year.

“I will also look back with great fondness and affection to the love that has been afford to me by the club, the managers, (owner) Mr Chansiri and his family, all the staff and my team-mates.”

Wednesday appeared to be mounting a play-off challenge before Christmas but are now 12th in the table, nine points off the top six, after Saturday’s 3-0 home defeat to Reading left them with one win in their last 10 league matches.