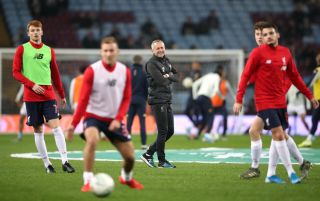 Liverpool manager Jurgen Klopp insists neither he nor his first-team stars will be present for their FA Cup fourth-round replay at home to Shrewsbury.

Instead, under-23 manager Neil Critchley will lead a side of youngsters in the fixture on Tuesday February 4.

Here the PA news agency takes a closer look at the issue.

Why is Klopp doing this?

The Liverpool manager has been a long-time, outspoken critic of a packed fixture schedule and the impact it has on players. Only 10 days ago Klopp said he would be viewed as ‘the Moaner from Liverpool’ after saying talking about fixture congestion was “the biggest waste of time ever”. His first-team stars have played 37 matches this season, including the European Super Cup final in Istanbul and the Club World Cup in Qatar, and have 15 more remaining in the Premier League with the Champions League starting up again next month. Having been given a winter break, and urged to respect it by the Premier League, he is making a stand. And it is not unexpected as he gave forewarning on January 17, saying: “All these different games to play and no break for the players but if you have that break don’t make a replay in this break. This would help massively.”

Who is Neil Critchley?

The under-23s coach came to wider public attention last month when he was put in charge of a youthful side to play the Carabao Cup quarter-final at Aston Villa, 24 hours before the first team played in Doha. Critchley, a former junior player at Crewe, moved to Liverpool in September 2013 having been academy director at the Alex for six years. Working in the Reds’ academy, he took charge of the under 18s until stepping up to the under 23s in 2017 to allow former midfielder Steven Gerrard to begin his coaching career with the younger players. Critchley was also picked by the Football Association to take UEFA’s first elite badge course and is one of the highest-graded coaches in Europe.

Who are the kids?

Several of the youngsters have been the best performers in the FA Cup this season and five of the side who started against Shrewsbury are likely to be in the XI for the replay. Toxteth-born 18-year-old Curtis Jones has scored in both matches, including a brilliant winner against Everton, and has made six first-team appearances. Pedro Chirivella, 22, is another who has impressed in the FA Cup, while Harvey Elliott, the 16-year-old summer signing from Fulham, Wales youth international Neco Williams and Yasser Larouci will meet the Shrews again. Midfielder Leighton Clarkson, 18, travelled to Shropshire but did not make the final squad but another summer arrival – 18-year-old Sepp Van Den Berg, who came from PEC Zwolle – will probably play in central defence along with another Dutchman Ki-Jana Hoever, who also has some first-team experience. Goalkeeper Caoimhin Kelleher, 21, has made three Carabao Cup appearances for the club this season.