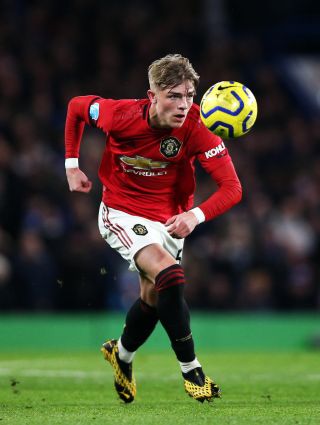 Brandon Williams is determined to kick on and help boyhood club Manchester United to silverware, continuing a breakneck rise that has yet to sink in.

Given the 19-year-old did not even make Ole Gunnar Solskjaer’s squad for the pre-season tour of Australia and Asia, few could have foreseen the left-back so quickly becoming such a key part of the first team.

Williams made his debut against Rochdale in the Carabao Cup at the end of September and has not looked back, clocking up his 22nd appearance of a whirlwind campaign as United drew 1-1 at Club Brugge in the Europa League on Thursday.

The teenager, who signed improved terms until 2022 shortly after his breakthrough, has been tipped for big things at Old Trafford, where the hierarchy have been so impressed that plans to sign a new left-back have been put on the backburner.

Asked if he has to pinch himself, Williams told the PA news agency: “I think it’s just come so quickly that I haven’t had time to think about what I’ve achieved at the minute.

“I’m just keeping going, wanting to play as many games as I can.

“I think if you think about it too much then it might affect your game.

“But you just want to focus on getting your spot in the team and just playing as many games as you can.”

Academy graduate Williams has thrived under the pressure brought by playing for his hometown club, although the Crumpsall-born full-back has naturally noticed an increase in attention around the city and beyond.

The 19-year-old is not fazed by that, though, and is determined to bring success back to United.

“I just think playing as many games as I can,” Williams said of his short-term goals.

“Just keep on improving myself but trying to win something at this club because I’ve dreamed of it since I was a young kid.

“We’re a young team, we know what we’re capable of and we’re just ready for the (rest of the) season after the winter break and to just try and get into that top four.”

United are still in contention for FA Cup and Europa League glory as well as a top-four finish following Monday’s 2-0 win at rivals Chelsea.

Williams played as wing-back at Stamford Bridge as fellow left-back Luke Shaw played on the side of a three-man defence, with the pair working together again in Bruges.

“We don’t really think about it too much,” he said of the competition ahead of Sunday’s clash with Watford.

“We just know there’s a challenge there and we both push each other to make ourselves the best possible players as we can.

“We’ve been playing with each other a few times now so we’re getting that good connection.

“I think we’re both attacking-minded as well, so when Luke has a chance, he gets around me and he’s also a top defender and I help him out in situations.”

A five-man backline has worked well for Solskjaer, whose trust in youth is paying dividends with Williams.

“Ole is always there for me,” the England Under-20 international said.

Williams’ clear determination to progress at his boyhood club means he will leave no stone unturned – even if that means giving up sausage and egg on toast, which his mum Lisa, who runs a cafe in Harpurhey market, recently joked he enjoyed.

“Nah, I think that was a long time ago, to be honest!” he said with a smile.

“I used to go there. I always help my mum out. She’s always proud of me and she’s always watching every game.

“It’s an honour (to play for United). It’s making my family proud and everyone around the area is proud of me.

“But, like I said, I just want to play as many games as possible.”