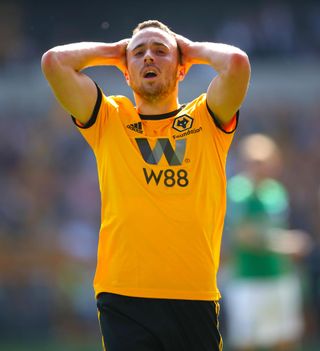 The Portuguese forward – a key player for Wanderers – has been nursing a foot problem recently that caused him to miss the 2-0 win over Watford and the Europa League victory against Besiktas on Thursday.

Jota did not travel to Istanbul as Wolves boss Nuno Espirito Santo opted to leave him in England to receive treatment in the hope that he would recover in time to be involved against City.

However, Nuno provided an update on the 22-year-old’s progress and it sounds unlikely that he will be available on Sunday.

“He is not 100 per cent. He still has some issues. Hopefully he will be with us soon,” said Nuno.

“It is a matter of time. First is to take away the pain that he is still suffering every time he tries to run, he still has some pain. Our medical department is taking care of it.

“He is not stopped, he is active he does a lot of exercises, a lot of cardio, so he manages, then he gets into the routine of the training session.

“If it is soon better, because we are a very short squad so every player is important – everyone.”

It is a quick turnaround for Wolves, with the trip to the Etihad Stadium coming just three days after their European excursion to Turkey.

However, Nuno is looking forward to the challenge, he said: “We just arrived home and we go now to Manchester. It is what we want – to compete against the good teams against tough opponents. We want to compete.

“What I see on Sunday is a fantastic and amazing team, fantastic squad, fantastic manager. The champions of the Premier League, one of the best teams. So it is a really good challenge for us.”