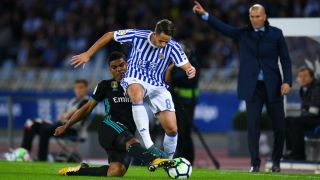 The 23-year-old looked destined for a successful career at Old Trafford when he broke into the first team as a teenager under David Moyes.

He became a key part of Moyes' side and regularly impressed on the flank with his ability on the ball, but Januzaj subsequently struggled once the Scot was sacked and replaced by Van Gaal.

Chances for game time soon dried up, Januzaj starting just seven Premier League games in Van Gaal's first season before going on loan to Borussia Dortmund at the start of the 2015-16 campaign, but there he found opportunities even more difficult to come by.

After another loan to Sunderland last season, Januzaj eventually escaped England for good and joined Real Sociedad in July, where he is finally enjoying football again.

"I didn't have any chances, really," Januzaj said of his time under Van Gaal at United.

"I wasn't in the race [for places]. How can I say this; he [Van Gaal] wasn't giving me the right signals to up my game. I was still only a young player.

"When you have a young player, a manager has to give them confidence. Let them play and grow up.

"Obviously, that didn't happen under Van Gaal, so it was a very difficult season for me. Before that, David Moyes had trusted me from day one.

"He understood I was a young player, but when Van Gaal arrived, everything changed, my progression stopped.

"For a football player, the most important thing is to have a manager who gives you a lot of confidence. Then you go on the pitch and give everything for the manager, the team and the fans.

"On the pitch, I never think what people are saying. All that matters is to try and look after the ball and do your best. At the time, that was what I was doing. I wanted to show my qualities. But, mentally, it was very tough.

"As a young player, to take all of this and the criticism, it wasn't easy at all.

"My life is good in Spain. Everything is going well for me. I am enjoying football and I would say LaLiga is a league made for me. It is a very technical league and I am a technical player, so it suits me well."