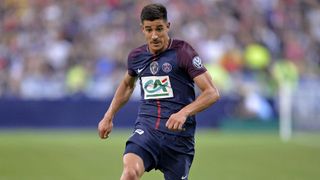 Yuri Berchiche has swapped Paris Saint-Germain for Athletic Bilbao in a deal reportedly worth an initial €20million.

Athletic confirmed on Monday that the 28-year-old had signed a four-year contract with a release clause of €100m.

The defender had previously been linked with Atletico Madrid, but will now be presented at San Mames on Friday.

Yuri only spent one season with PSG after joining the club from Real Sociedad, making 35 appearances and helping the French champions to a domestic treble.

But with PSG under pressure from UEFA to make player sales in order to meet Financial Fair Play regulations, Yuri was one of the players new head coach Thomas Tuchel was willing to jettison.

The left-back will now return to Spain, where he has previously played with Sociedad, Eibar, Real Union and Real Valladolid.

Athletic, who struggled to a 16th-place finish in La Liga last season, have history in adding players associated with Basque rivals Sociedad, having signed Inigo Martinez in January.

Yuri previously represented Athletic as a youth player and returns to the club 11 years after his initial departure.