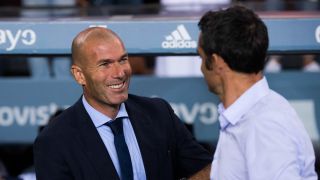 The Catalan parliament plans to hold a referendum on October 1 on whether the region should separate from Spain, although a national court has this week blocked those plans.

It has been speculated that Barca and Espanyol, who meet in a derby match on Saturday, could have the chance to play in France's Ligue 1 if the independence campaign is successful.

But Zidane feels any exit from LaLiga would be damaging to the competition, telling a news conference: "I can't see a Spanish league without Barcelona. It's all I can say as a fan of football, of this sport.

"I'm not going to get into it because there are people who want it and people who don't. I simply can't see a Spanish league without them."

Zidane went on to defend comments made by Madrid president Florentino Perez with regard to referees in Spain's top flight.

Perez stated his belief that officials are not operating to the required standard in LaLiga and Zidane feels his opinion is justified.