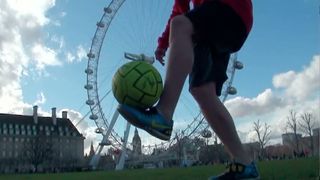 Everybody loves to see an average Joe juggling a ball on their tongue, while playing the ukulele and bouncing on a space hopper at the tip of the Eifel Tower, but how does freestyle really help your game when you're out on the pitch?

Starting with the basics and building up to some real showstoppers, John will teach you how to execute these tricks, while making them relevant to competitive football.

For his curtain raiser, John presents the foot balance….

John Farnworth is attempting to freestyle the London Marathon for Kick4Life.