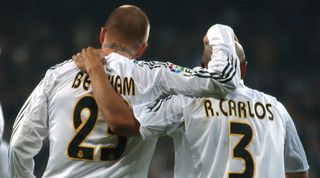 “I’ve never seen a game where someone controls it like that from the right wing. He was phenomenal and on top of his game. I was like, ‘How has he managed that?’ Maybe it was because everyone looked for him subconsciously – muscle memory, give it to Becks. People forget how a good player he was.”

So Emile Heskey told FourFourTwo in November 2018 of David Beckham’s remarkable performance against Greece in 2001 – one defined by that last-minute free-kick which qualified England for World Cup 2002, but perhaps should be remembered for more.

Was Beckham underrated as a player? His public profile in the mid-to-late-90s was partly defined by his good looks, sarongs and celebrity girlfriend, and that playing reputation was certainly not helped by the red card at France 98 which earned him villainous status countrywide.

But god, he could play. His return to domestic football in 1998/99 as the most hated man in English football coincided with the greatest season of his and Manchester United’s lifetime: that stunning treble which may never be emulated.

For today’s quiz, we’re after the men who helped Beckham along the way – namely, his most regular team-mates across United, Real Madrid, LA Galaxy and England. You’ve got 10 minutes to recall as many as you can using the clues provided, then tell us how you fared @FourFourTwo – glorious retweets on offer if you don’t give away spoilers.

Anyone who gets 50 is a) an LA Galaxy fan, b) also someone with great knowledge or c) most likely, a bloody liar. Good luck…

WEIRD Liverpool at Bramall Lane, and 11 more of football's odd streaks and hoodoos

WATCHPremier League live stream 2019/20: how to watch every game from anywhere in the world