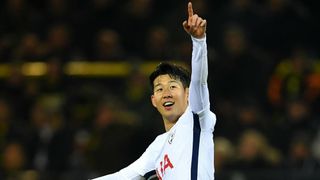 Tottenham came from behind to beat Borussia Dortmund 2-1 and make certain of their status as Champions League Group H winners.

Second-placed Real Madrid can match Tottenham's points tally on the final matchday of the group stages but Mauricio Pochettino's men will remain in first place regardless thanks to their superior head-to-head record over the holders, giving them hope of a favourable draw in the last 16.

Meanwhile, the results ended Dortmund's chances of qualifying for the knockout stages.

Pierre-Emerick Aubameyang marked his return to the Dortmund side following a club-enforced one-match suspension for disciplinary reasons by scoring the opening goal, as Peter Bosz's side sought to relieve the pressure building on the coach.

But Spurs have relished Champions League fixtures this season and they played with their usual composure and patience at Signal Iduna Park, where Dele Alli set up Harry Kane to score the equaliser after 49 minutes and Son Heung-Min completed the comeback by netting the winner with just 14 minutes left to play.

Dortmund started the game brightly and Andriy Yarmolenko combined with Mario Gotze to create a shooting chance after 12 minutes but his effort from the edge of the penalty area flew tamely into the arms of Hugo Lloris.

Yarmolenko chipped a weighted pass over the Tottenham defence for Aubameyang six minutes later, but the Gabonese striker side-footed his shot wide to the right of the net with only Lloris to beat.

Son Heung-min almost connected with a Jan Vertonghen free-kick just before the half-hour mark, but he was denied by Roman Burki and one minute later Dortmund were ahead.

Raphael Guerreiro's pass was brilliantly flicked into the box by Yarmolenko and Aubameyang raced after it before driving the ball low into the left corner of the net.

Spurs launched an onslaught on the Dortmund goal in the last five minutes of the first half but both Christian Eriksen and Eric Dier were denied at close range by superb saves from Burki, whose fingertip stop from Dier's header was particularly outstanding.

Four minutes after the restart, Danny Rose closed down a Jeremy Toljan clearance and Alli squared the loose ball to Kane on the edge of the box, giving the England striker just enough time and space to fire the ball into the net, beating Burki at his near post.

Alli tried his luck from 25 yards on 57 minutes after good work by Kane and Eriksen but the playmaker's shot drifted wide of the target.

Just as the pace of the game seemed to be slowing, Alli's persistence down the left flank paid off and he forced his way into the box before knocking the ball to Son, who unleashed a right-footed shot into the top corner of the net.

Eriksen almost made it 3-1 with a header from an 80th-minute Rose cross but the ball flew wide to the right of the goal, and substitute Fernando Llorente was denied a late strike when Burki saved at his feet.