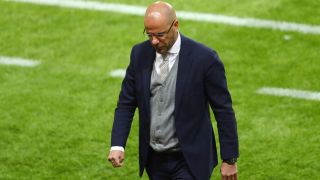 Peter Bosz conceded the occasion got to his young Ajax side as they limped to a disappointing 2-0 Europa League final defeat against Manchester United.

Ajax have drawn plaudits for their free-flowing, vibrant football in Europe's secondary competition this season, but the showpiece in Stockholm proved a step too far as goals from Paul Pogba and Henrikh Mkhitaryan sent United into next season's Champions League.

The team named by Bosz was the youngest ever in a major European final and the Ajax coach is sure his squad will learn from the experience.

"Like I said, they're not used these young kids to play a final, it's all new for them," he told a post-match news conference.

"It's difficult to come from behind against a well organised team, the second half we were barely out of the dressing room.

"We were not good enough, we didn't have a lot of chances."

The match was played just two days after Monday's atrocities in Manchester in which 22 people were killed and 59 injured as a result of an attack by a suicide bomber following an Ariana Grande concert.

And Bosz believes the emotion of the occasion affected both teams.

"Of course I think so, we talked about it," he added. "In the media there was a lot going on also.

"Obviously both sides were affected, but once you play the final I think from that moment you forget it, you have to play."