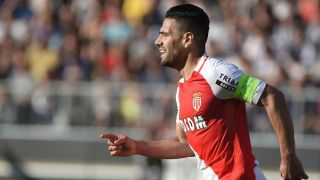 Monaco striker Radamel Falcao believes he is a better player having failed to make an impact during his two seasons in the Premier League.

The Colombia international flopped at both Manchester United and Chelsea, scoring only five goals across two years in England, but he has starred on his return to Monaco this season.

Falcao's 25 goals in all competitions have helped to fire Leonardo Jardim's men to the top of the Ligue 1 table and the 31-year-old hailed his Premier League spell as an important time in his career.

"You learn from every experience, both good and bad," Falcao told CNN ahead of Monaco's Champions League quarter-final at Borussia Dortmund on Tuesday.

"My time in England gave me experiences which I've learned from and have made me better. I was always sure that when I had continuity in matches and minutes, my form would return to the level I was used to and the goals, as a matter of consequence, would come.

"It was only a question of getting confidence back and feeling like an important part of the team. Every weekend playing matches and getting minutes - this is definitely what has made the difference.

"This club have always been behind me, supporting me. They know the qualities I have not just as a footballer, but as a person."

Falcao has shaken off a hip injury to take his place in the Monaco squad against Dortmund and the striker is backing Jardim's men to come out on top after shocking Manchester City in the last round.

"We're very excited for what's going on and what we're doing right now. We have a very strong rival in Dortmund, but I think it's a very level tie," Falcao added. "Our hope is to beat them and go on in the competition.

"I think that surely with the same conviction, work and concentration that this team has shown, we can still get better and better as a group. Hopefully that will be enough to beat Dortmund."

Having turned down lucrative moves to the Chinese Super League, Falcao revealed he still has a number of targets to hit in his career, including playing in the World Cup for Colombia after missing the 2014 tournament with a serious knee injury.

"I have some goals in that I'd like to achieve and I hope to achieve them," said Falcao. "In the future, you never know. Maybe the opportunity pops up to go play [in China] or in the US or go back to South America. They're situations that you analyse when they arise together with your family and you'll make the right decision.

"It's a personal dream of mine to be able to play at the World Cup. To represent one's country for any footballer is the best. We all dream as kids of being able to one day put on the shirt for your country, to represent it and to hear the anthem. It's such a large number of emotions that I've had the opportunity to enjoy over many years in my career and I'd like to keep doing so, above all in the World Cup in Russia."