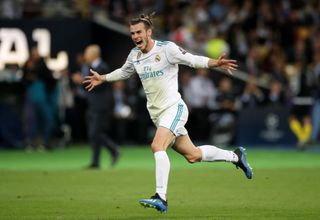 Gareth Bale scored as Real Madrid took a dramatic 3-2 win on penalties against Arsenal in their International Champions Cup clash.

Bale, whose potential departure from the Spanish side has dominated the headlines this week, helped spark a second-half comeback for Real which left the scores tied at 2-2 at full-time in Washington DC.

The Welshman came on as a substitute at half-time, after Alexandre Lacazette and Pierre-Emerick Aubameyang had put Arsenal firmly in the driving seat.

Nine minutes later Bale found the back of the net, tapping in from six yards to halve the deficit.

His goal was swiftly followed by another from Marco Asensio, whose clinical finish in the 59th minute pulled the Spanish giants level.

Bale later helped bail out goalkeeper Thibaut Courtois by clearing an Arsenal shot – but had less success in the ensuing penalty shoot-out.

His tame effort was easily saved by Emiliano Martinez, but Real claimed the victory in the pre-season friendly at FedExField when Arsenal youngster Robbie Burton sent his attempt over the bar.