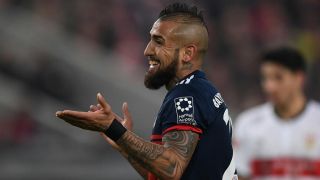 Arturo Vidal insists he is not thinking about leaving Bayern Munich and would be happy to extend his contract at the club.

The Chilean midfielder, who joined Bayern from Juventus in 2015, has seen his future come under scrutiny this season amid reported interest from Chelsea.

Bayern's deal to sign Leon Goretzka from Schalke at the end of the season has encouraged talk Vidal could be allowed to leave, with Inter also said to be monitoring his situation.

But the 30-year-old has no plans to leave the Allianz Arena and would consider an extension to his contract, which expires in 2019.

"I don't think about a transfer," Vidal was quoted as saying by Sport1. "I feel very comfortable here.

"Of course I would like to extend my contract. That's an option. My kids are very happy here, too."

Vidal has made 18 Bundesliga appearances this season, scoring six goals.