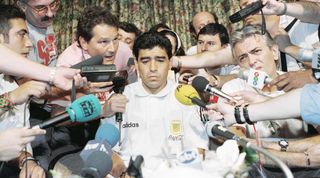 Euro 2020 has been postponed, nobody knows what's going to happen to the rest of the football season and COVID-19 has us all cooped up inside. Still, we can take a smidgeon of solace in knowing there have been terrible summers before and there will be terrible summers again. Let's relive a few horrors.

For 31 glorious months, Anzhi Makhachkala lived the dream – sort of. They might not have won the league or progressed past the last 16 in the Europa League but, spearheaded by the world's highest-paid player Samuel Eto’o, the Dagestan outfit caused a stir after snapping up some of Russia's (and Europe's) finest talents.

But then their billionaire owner pulled the plug. Just four matches into the 2013/14 season, Suleiman Kerimov slashed the club’s annual budget and put the entire first-team squad up for sale. Eto’o was quickly followed out of the exit by the likes of Willian, Aleksandr Kokorin (signed and sold in the same window, before he'd even played a game), Igor Denisov (within two months of signing), Oleg Shatov, Lassana Diarra and Christopher Samba in a crazy two-week cull. Others followed later, including Lacina Traore to Monaco for £8.8 million – almost half of what Anzhi had paid for him six months previously.

Unsurprisingly, Anzhi finished bottom of the Russian Premier League with just three wins all season, and were relegated to the National Football League.

2. From Russia without love

Anzhi's first-team squad weren’t the only ones to incur the wrath of Kerimov’s cost cutting. After Sir Alex Ferguson’s retirement, Manchester United coach Rene Meulensteen’s 12-year association with the Reds ended when the 50-year-old decided to go his own way.

That is, after Guus Hiddink left two games into the season and assistant Meulensteen was handed the reins. But his Anzhi breakthrough soon turned into a break-up when, after just 16 days, he was sacked and replaced with former boss Gadzhi Gadzhiyev after failing to win any of his four matches in charge. Unfortunately for Rene, his next managerial gig at Fulham didn't go any better.

Until Germany added food for thought in 2014, the Maracanazo had loomed large for over 60 years as Brazil’s biggest sporting disgrace. While the nation mourned, goalkeeper Barbosa was scapegoated for the shock loss to Uruguay in 1950 and never allowed to forget it.

The goalkeeper had expected Alcides Ghiggia to cross from out wide, but was caught out of position and beaten at his near post for the match-winning strike. The moment haunted Barbosa for the rest of his life and even prevented him from meeting Brazil’s 1994 World Cup squad for fear he would bring bad luck.

Just two weeks before his death in April 2000, the poor sufferer lamented: “Under Brazilian law the maximum sentence is 30 years. But my imprisonment has been for 50.”

4. Nipping up the road

For most football fans, the summer provides a chance to renew expectations about their team’s chances. That, however, was not the case for Wimbledon fans at the beginning of the 2003/04 campaign. By this point they knew full well that their club would be imminently relocating to Milton Keynes; the decision had been made for good, and the club had fallen into administration.

Although the move was sanctioned by an independent FA panel in May 2002, it wasn’t until September of the following year that the Dons finally moved into their new temporary home at the National Hockey Stadium. The majority of supporters turned their backs on the club in disgust, after owner Pete Winkelman changed the club's name, badge and colours to kill off Wimbledon as English football knew it.

Florian Marange pitched up at Crystal Palace in summer 2013 as Ian Holloway’s ninth signing, but fumed just two weeks later that he wanted to “rip up” his contract. Why? Along with fellow new boy Stephen Dobbie, the former France Under-21 international had been left out of the south Londoners' 25-man Premier League squad.

“I have never been presented to the press, I have never had an official photo and I am still waiting for my club suit,” moaned the ex-Bordeaux defender. With just a solitary League Cup appearance to his name, he promptly departed to Sochaux in October. “I needed some pace in that backline and he hasn’t got it,” Holloway grumbled. Who knew about scouting, eh?

The 2012/13 season should have been an exciting time for Ryan Taylor, having cemented his status in Geordie folklore with a free-kick at the Stadium of Light the season prior, and with the promise of European football to come.

After that, though, the dead-ball specialist suffered consecutive career-threatening cruciate ligament injuries, with the first coming in the Europa League that summer. Eight months on the sidelines followed, before a potential comeback was thwarted by a recurrence of the same injury in training.

Taylor finally made his comeback more than two years on, but was released at the end of the season along with cancer sufferer Jonas Gutierrez. "John Carver rang me and told me the club weren't going to offer me a new deal," recalled Taylor, now of Indian Super League club ATK. "Then he asked me to pass the phone to Jonas, which was unbelievable."

While Meulensteen’s Anzhi stint made Brian Clough’s time at Leeds United look long-term, the iconic Englishman’s 44 days at Elland Road in summer 1974 have become the stuff of legend. Clough was outspoken in his criticism of Don Revie’s highly-revered Leeds side during his time at Derby, many of whom Old Big ‘Ead inevitably later clashed with in the dressing room.

On reflection, the Teessider's statement to his new players that “you can all throw your medals in the bin because they were not won fairly” may have been unwise. Having alienated a dressing room including star men Billy Bremner, Johnny Giles and Norman Hunter, Clough was sacked in September after winning just one of his six games in charge.

Naturally, he returned to football within four months and turned Nottingham Forest into English and European champions.

8. El Diego does it again – for the last time

Diego Maradona was no stranger to controversy during his playing days: see the Hand of God in 1986, a cocaine-induced 15-month ban in 1991 and a suspended jail sentence for shooting journalists with an air rifle (to name but a few). True to form, the Argentine legend’s notoriety was cemented at USA '94 after he failed a drugs test for ephedrine doping.

Despite being overweight and 33, the superstar was once again cast in the role of saviour for his national side; his goal in the 4-0 victory over Greece was seen as the beginning of a fairy tale swansong. Yet, when his drugs test came back positive just days later, he was banned from the tournament and would never play for the Albiceleste again.

Argentina mourned the news and soon crashed out of the competition to Romania, while fierce rivals Brazil went on to lift the trophy in Pasadena.

There was a time when a place in the Football League could only be gained through election by its members, who would rarely choose to turf out one of their own in place of a non-league applicant. But all of that changed in the 1986/87 season with the introduction of automatic relegation.

A bridge between the Football League and Conference had been constructed – albeit if only two teams swapped places. However, the new rule had fatal consequences for several clubs. Dependent upon the financial structure of the Football League to survive, relegation effectively proved the beginning of the end for the likes of Aldershot, Maidstone United and Newport County, who all went out of business not long after dropping down to the fifth tier.

10. Rangers keep name, lose everything else

Rangers survived their 2012 financial meltdown due to the sale of their “business, history and assets” to Charles Green’s consortium, but the deal also meant their key players were free to sign elsewhere.

And they did, of course: after the Gers were demoted to the Third Division, the likes of Steven Davis, Steven Naismith and Steven Whittaker (there’s a theme here somewhere) jumped ship after exercising their rights under UK labour laws.

Rangers gradually clawed their way back and returned to the top flight with a third-placed finish in 2016/17.

The 10 best strikers in the world

The 10 best forwards in the world