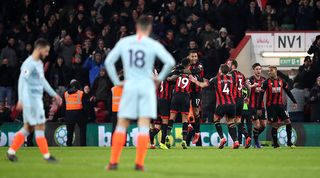 Having just been walloped 5-0 by Newcastle, Manchester United were expected to take out their frustration on a Southampton side who'd won only two of their previous 10 encounters. But things didn’t go to plan for Alex Ferguson’s men, who were already 1-0 down when Roy Keane was given his marching orders in the 21st minute.

Matt Le Tissier made it 2-0 in the 35th minute, and although David Beckham reduced the arrears soon after, Saints restored their two-goal cushion through Egil Ostenstad shortly before half-time. David May then pulled another back for United early in the second half, but their resilience was broken late on as Southampton scored three times in the final 10 minutes, putting the game beyond the Red Devils despite Paul Scholes’s late consolation.

Having just held Tottenham to a 1-1 draw at White Hart Lane, Sunderland may have been quietly confident of picking up another point in London when they visited Stamford Bridge in November 2010. Anything more than that looked highly improbable, though: Chelsea topped the table after a dozen fixtures, while they had suffered defeat in only three of their last 126 Premier League home matches.

Nedum Onuoha gave the Black Cats a shock lead just before half-time, but one goal was never likely to be enough. The home side pushed for an equaliser but couldn’t find one, as further efforts from Asamoah Gyan and Danny Welbeck gave Steve Bruce’s men a tremendous triumph at Chelsea’s fortress.

The year 2008 was one of the most significant in Manchester City’s history, with the Abu Dhabi United Group completing their takeover of the club on September 1. Four-and-a-half months before that historic moment was another: City’s biggest defeat in the Premier League era.

Neither team had anything to play for on the final day of the season, yet it was clear from the opening exchanges that they didn’t share similar levels of motivation. An early Richard Dunne red card certainly didn’t help the visitors, but losing 8-1 to a Middlesbrough team that finished just six points above the bottom three made for one of the most embarrassing results in the club’s history.

Middlesbrough were teetering on the brink heading into this game in April 2001, having triumphed in just one of their last 10 top-flight fixtures. A side jointly managed by Terry Venables and Bryan Robson found themselves just one place and two points above the dreaded dotted line at kick-off, a precarious position which was likely to get even worse after an afternoon at Highbury.

The Gunners needed all three points to prevent Manchester United from wrapping up the title with five games to spare, but they were powerless to resist as Boro ran riot. A pair of own goals from Edu and Sylvinho set the visitors on their way in the first half, before Hamilton Ricard’s strike shortly before the hour mark put the icing on the cake for Tel and Robbo.

Little was expected of Barnsley in their debut top-flight campaign of 1997/98 following a surprise promotion the previous year. Early home triumphs over Crystal Palace and Bolton gave the Tykes hope that they could avoid an immediate return to the second tier, but the difficulty of their task was laid bare when they picked up only four points from a possible 30 before this daunting trip to Merseyside in November.

Liverpool had made an inconsistent start to a season in which they were expected to push for the title, but a team containing Michael Owen, Jamie Redknapp and Steve McManaman were expected to make light work of Danny Wilson’s strugglers. Instead, Ashley Ward’s first-half effort was enough to give Barnsley their first ever away win in the top tier.

In hindsight, this perhaps wasn’t as much of a surprise as it seemed at the time, but the initial shock value of Norwich’s opening-day victory over Arsenal shouldn’t be underestimated. The Canaries had only narrowly avoided demotion to the second tier in 1991/92, while Arsenal were one of the favourites to win the inaugural Premier League.

It was Norwich who ultimately launched a title tilt as the Gunners finished 10th, with this August triumph setting the Norfolk club on their way to their best ever league finish of third. A routine home win looked to be on the cards when Steve Bould and Kevin Campbell gave Arsenal a 2-0 lead at half-time, but four Norwich goals in the space of 15 minutes turned the game on its head in extraordinary fashion.

Suffering your worst home defeat in over 56 years is bad enough; much worse when it's those noisy neighbours down the road inflicting it upon you... again. Manchester City had beaten United 5-0 back in February 1955, but this one at Old Trafford got rather more attention – understandably so, given that Alex Ferguson later called it his "worst ever day" in management.

Roberto Mancini's side were stunning on their rivals' patch: David Silva ran the show with a masterful display, and capped the scoring after other goals from Mario Balotelli (2), Sergio Aguero and Edin Dzeko (2). In the end, though, they left their eventual title win rather late...

A 3-2 victory away from home suggests a battling, resilient performance from West Brom, but for the most part this was a comfortable afternoon for Roberto Di Matteo’s charges. Not that anyone was anticipating it to be: the West Midlanders hadn’t won any of their last 19 away games in the league before this trip to the Emirates in September 2010, while Arsenal had begun the season strongly having gone undefeated in their first five games.

West Brom showed little regard for the script, however, storming into a 3-0 lead thanks to goals from Peter Odemwingie, Gonzalo Jara and Jerome Thomas. Arsenal eventually mounted a fightback of sorts, but a late Samir Nasri brace wasn’t sufficient to deny the Baggies a memorable victory.

It’s often claimed that the form book goes out of the window in derby games, but there seemed little chance of an upset when Chelsea entertained their fellow west Londoners in January 2013. QPR looked like relegation certs having failed to win 19 of their first 20 league games, while the Blues had recently thrashed Aston Villa 8-1 and were well positioned to mount a title challenge.

Rafael Benitez’s side dominated possession and had 26 shots to their opponents’ seven, but they were unable to break down QPR’s packed defence and became increasingly desperate as time ticked away. A scoreless stalemate looked likely as the game entered its final 15 minutes, only for former Blues Shaun Wright-Phillips to eventually break the deadlock.

The 10 most bizarre deadline-day stories

With Blackburn embroiled in a civil war which turned the majority of the club’s supporters against owners Venky’s and manager Steve Kean, any suggestions of an away win at Old Trafford on New Year’s Eve 2011 would have been laughed out of the room. Rovers were bottom of the standings having won just one of their last 13 games, while United knew that victory would move them into top spot as they prepared to welcome 2012 in with a bang.

Even when Yakubu scored his and Blackburn’s second in the 51st minute, a Blackburn win looked improbable – and that feeling only intensified when a double from Dimitar Berbatov restored parity. Kean’s men weren’t done there, though, and Grant Hanley popped up with 10 minutes left on the clock to settle this five-goal thriller in favour of the rank outsiders.